Design a site like this with WordPress.com
Get started
Skip to content
April 27, 2021April 30, 2021 Loves Jesus and America too

We welcomed our son, Joseph Fulton, on Saturday April 24, 2021 at 3:39 in the afternoon after what was a rather swift labor experience! He weighed 7 lbs 15 oz and was 21.5 inches long. We are so glad he’s finally here and have been praising God for the blessing of his life.

The week leading up to my due date I began feeling slight contractions each night just before bed, but they didn’t amount to much and would fizzle out by morning. I went for an appointment with my doctor on Friday morning, and found out I was slightly dilated, with my body beginning to prepare for labor! That day the doctor swept my membranes with the hopes that things would progress soon. That afternoon Gianna and I took a nice long walk just to nudge the whole process along a little bit.

Saturday morning I woke up around 5 AM with what felt like a contraction, but I didn’t think much of it. I went back to sleep, until I was woken up several minutes later by another, and then another, and another. Around 7 AM I woke Dom up and told him I thought I was having pretty consistent contractions. Shortly after, they began to intensify quite a bit. We had a nice breakfast and Dom’s parents came to pick up Gianna, so she could stay with them when we went to the hospital. Hilariously, and in typical fashion for us — Dom was landscaping and mulching the front of our house while I was inside laboring. I was timing my contractions and saw they were coming closer together, but I wanted to labor at home for as long as possible. I gave my mom a call and talked to her in between contractions. After hearing me for a little while, and noticing how close together my contractions were, she urged me to tell Dom it was time to go to the hospital. So, I did, and we went in around 1:00 in the afternoon. I was not expecting to be very far along, but when the doctor checked me, I was 8 cm! She said she thought I would be ready to push soon, which was so encouraging.

At this point, we were admitted to a delivery room. The contractions were coming close together, and they continued to intensify. What gets me through the most difficult parts of natural labor is uniting it to Christ’s sacrifice on the cross and offering the pain for specific intentions. I had a list of intentions that I brought in with me, and with each contraction I focused on what I specifically wanted to offer the pain for. I had my rosary and a crucifix with me, but I found myself closing my eyes and simply picturing Jesus on the road to Calvary before me. Scourged, bleeding, carrying His cross over his shoulders, His eyes meet mine with each contraction. Having a Christ centered childbirth has enabled me to have natural deliveries with Gianna and Joseph. I’ve found it powerful to give purpose to my pain and lean into the suffering by offering it up for specific intentions.

Last time around, I mainly experienced “back labor” with each contraction and once Gianna was born, we were told it was because she was born occipital posterior or “sunny side up” as they say. I was a little afraid Joseph would be the same way as I felt a very similar back pain this time around, but it turns out he was indeed face down, allowing for the pushing phase to go much faster and smoother.

As time went on I continued to offer up the pain as it intensified. I kept picturing Christ and walking with Him in His suffering. The nurses and doctor kept assuring us of how well we were handling labor, and how well Dom and I worked together. I have to say, there is nothing like labor and delivery to make me appreciate my husband for the man he is. He tells me he simply tries to be supportive and not annoying, but there is so much more to it than that. His presence alone comforted me, and he would physically aid me as I labored through the pain, but he kept reminding me of what we were offering it for — and I know he prays us through as well. He’s truly my rock, a steady hand, a protector, and I’m so so grateful for him.

The doctor came back in to check on us and told me I could begin pushing, so we got set up to push. At this time, everything faded away as the pain became nearly unbearable. All I can remember is calling out to Jesus for help and praying the Hail Mary with every breath I had. I broke my water while pushing (it was kind of hilarious and alarming as it flew out) and within twelve minutes, Joseph Fulton was birthed into the world and I was so relieved! What a beautiful, peaceful, powerful resurrection moment following all of the suffering that led to it.

Praise God, we were able to bring home Joseph the very next day and we are currently settling into life as a family of four! If you prayed for us, thank you from the bottom of our hearts. We felt covered in grace through this whole experience and are profoundly grateful for any prayer that was offered for us in this time!

Published by Loves Jesus and America too

View all posts by Loves Jesus and America too 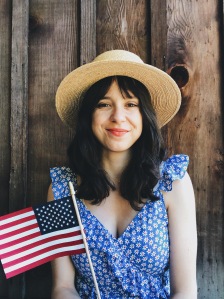 Hi there! Welcome to Loves Jesus & America too. I’m Katherine, the girl behind the blog. I’m an American wife and mother living on a small farm and sharing the details of my life from home renovations and ethical fashion to the beauty of faith and how that guides my family. I’m humbled your here and I hope you’ll stick around!

“Our Lord made me understand that the only true glory is that which lasts forever and that to attain it there is no necessity to do brilliant deeds, but rather to hide from the eyes of others…it was made known to me interiorly that my personal glory would never reveal itself before the eyes of men, but that it would consist in becoming a Saint. This was precisely the flower I wished to offer to Jesus, a hidden flower which keeps its perfume only for Heaven.”
Ocello, party of five! 🖐🏼
“Martha, Martha, you are anxious and worried about many things. There is need of only one thing. Mary has chosen the better part and it will not be taken from her.”
“…leaving all things they followed Him.” + Luke 5:11
Today is the Feast of the Sacred Heart of Jesus.
By popular demand, in honor of #pride month. 🌈❤️‍🔥