“Perhaps we are out of line with the rest of society, to which I say – Good. So were the abolitionists, so were the civil rights marchers, so were the martyrs in Rome, and the Jews in Egypt. Righteousness doesn’t have to be popular, it just has to be righteous.” -Ben Shapiro’s words from the 2019 March for Life

Hi friends! I’d like to share a little bit about my experience at this year’s March for Life with you, as well as some important topics that I feel need to be discussed in relation to this critical issue.

We attended this year’s March for Life with our church from New Jersey. We started our day with mass and a beautiful homily by our parish priest. He encouraged us to fight for a change in the law on the books, but to more importantly pray for a change of hearts.  After mass we began our trip to DC! Despite one of our buses breaking down on the way, we were able to make it to DC just in time for the march to begin! We joined in with over 650,000 others to march for the most fundamental right of all, the right to life. It’s amazing what a truly joyful march it is. When you’re fighting for what is beautiful and true, there really isn’t a need for nasty remarks or hateful behavior.

Granted, 61 million children murdered in their own mother’s wombs under the laws of the United States is certainly something to be angry about. As a nation, the blood of these children is on our hands, and any anger harbored over this matter is certainly righteous. However, we don’t allow ourselves to be defined by our frustration with the intrinsically evil, secular law that governs our land and destroys women and children every single day. Instead, we choose to define ourselves by our hope for the future, our faith in God’s power and goodness, and our love for every precious human life.

We had a beautiful day marching for the abolition of abortion and we will continue to fight for the rights of the unborn – who are truly the most vulnerable, marginalized, and abused group in history. Today, we often hear about groups that are mistreated by our government and whose lives are perceived to be devalued. Frankly, some of these concerns are valid, but others simply fit the mainstream media’s narrative and are used to push a certain agenda that ultimately doesn’t value them. No matter what group pulls at your heart strings, there is no group more widely massacred and devalued than the unborn. The March for Life serves to fight for an end to abortion, and this is the original definition of what being pro-life means. While there are other pressing issues that you may feel passionately about, abortion + euthanasia are the sole issue that as Catholics we must agree on. This is informed by the doctrine of the Catholic Church. According to church doctrine, there is room for discussion and even disagreement on matters of economics, border security, immigration, healthcare, and waging war. There is no room for discussion, disagreement, or compromise on abortion + euthanasia.

This is why there is indeed a correct way to vote as Catholics, and there are causes we are obligated to support. While we don’t need to enthusiastically attach ourselves to a specific world leader or political party, we do need to value a candidate’s stance on this issue before and above all others. If you have been instructed otherwise, you have been misled. I encourage you to dig deeper into the Catechism and doctrine of the Catholic Church and search for the highest truth and prayerfully discern who to vote for and what causes to lend your support to. While we certainly treat all human beings with respect and uphold the dignity of all lives, we are called to value the most vulnerable and fight for those who are truly the only ones with no voice at all.

Moving forward, I continue to urge you to always stand up for what is right, and always fight for life. Support the women who are faced with unplanned pregnancies or find themselves in an incredibly difficult position. Be bold in sharing the truth of what abortion is and how harmful it is to women, children, and our nation as a whole. Do your research and remain informed on matters of abortion + euthanasia. Vote for candidates who are pro-life and vehemently anti-abortion. Most importantly, pray for those who are victims of abortion, and also pray for a change of hearts in those who support abortion.

I’d like to end this post with some photos we took while in DC at the march! We spent the day with family, bumped into some friends along the way, and left with such joy and hope from being among this beautiful, huge crowd of people who feel passionately about the right to life! 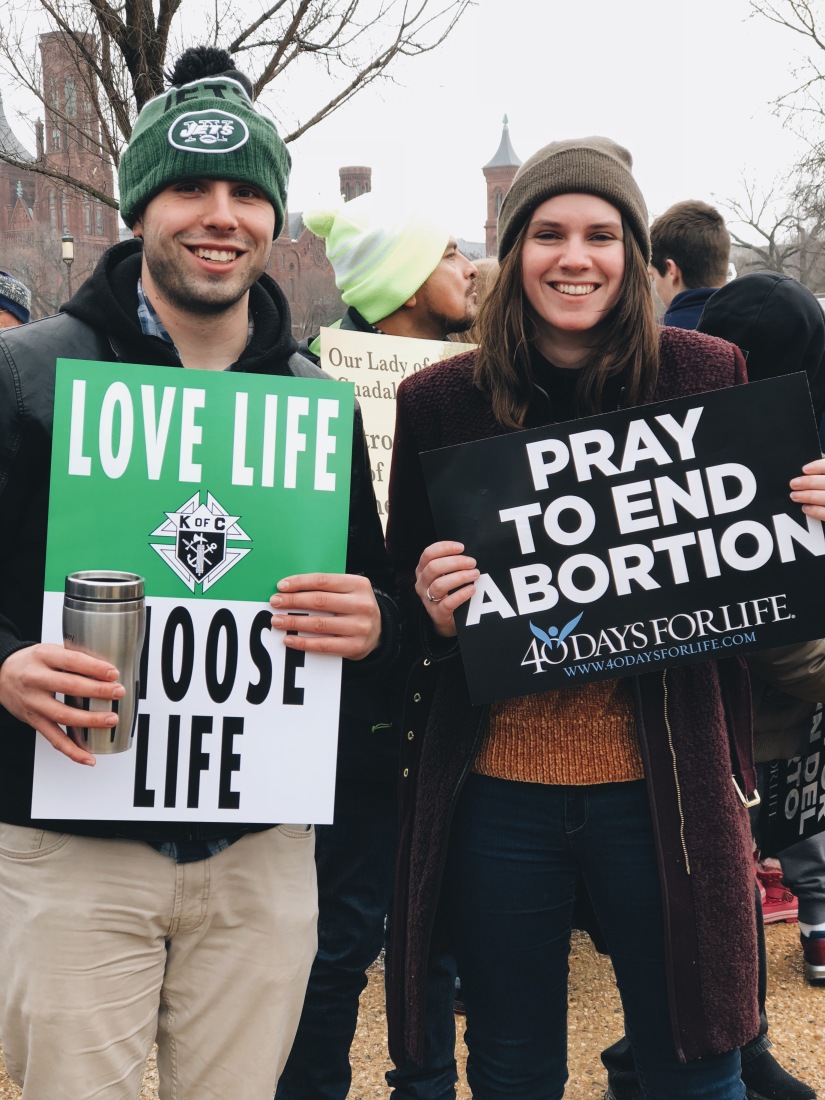 Thankful for all of those who spent their time, talent, and treasure organizing The March for Life and for those who are in the trenches every day fighting for and praying for an end to abortion. God bless you & God bless America!

Published by Loves Jesus and America too

View all posts by Loves Jesus and America too